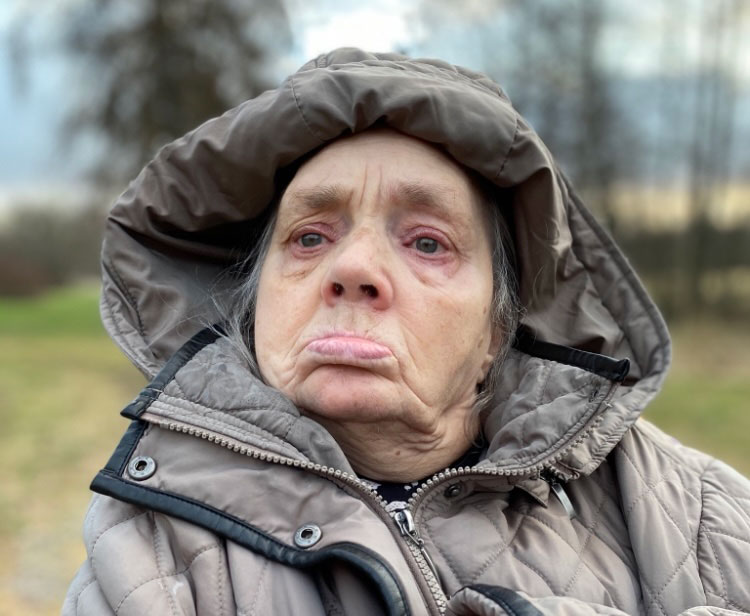 Ann-Charlotte is 73 years old and lives in Sweden. Many thanks to Ann-Charlotte, her family and Helena Wandin at The National Rett Centre in Sweden for permission to share this story in the first of our new Family Focus features.

‘Ann-Charlotte “Lottan” Holmström is most probably the oldest person with Rett Syndrome in Sweden and in all likelihood one of the oldest in the world. For thirty years she lived in the same supported housing unit, where the staff and her fellow residents were like family. In 2019 the unit closed and Lottan moved to an old people’s home. We spoke to her sister, Ametist, about the current situation.‘

”There are incredible differences between the resources that are available now for families who have children with disabilities compared with when Lottan was little. It’s great that things have improved, but at the same time I’m sad when I think how it has been for my sister”, says Ametist.

Lottan grew up in Södermalm, Stockholm in the middle of the 20th century together with her sister, who is 13 years older, and her parents. At that time there was no help available at home or in schools for children with disabilities. Instead, there was an expectation that parents would leave their children to live in an institution. Despite that, Lottan’s parents tried to keep their daughter at home. Lottan likes to listen to music and when she was little her father used to play the guitar and the piano for her at home in their apartment.

When Lottan was nine years old her little sister, Ametist, was born. The family apartment was three floors up without a lift and both children cried during the nights. It became too much for their parents and in January 1958 Lottan moved to the newly opened institution, Carlslund in Väsby, Uppland which is outside Stockholm. The family tried to visit every weekend, but it was a long journey without a car.

“I have horrible memories of that time. I have found it very hard to understand how our parents could leave her there. But I have come to understand that at that time it was considered to be a fantastic place that was right at the forefront of what was best for people like Lottan” explains Ametist.

In 1986 Lottan moved to a supported housing unit in Rotebro, outside Stockholm. She lived there until 2019, sharing the accommodation with three others. They each had their own room and a shared living area where they could socialise, bake and have a coffee.

”One of the other inhabitants had been together with Lottan since her days in Carlslund. That is a big deal when you don’t have other friends. And those she lived with became, in many ways, more of a family to Lottan than us. We tried to get Lottan to come and celebrate Christmas with us, but she wanted to be with her friends at the home”, says Ametist.

Instead, the sisters have their own tradition: they travel to look at the Christmas window display at one of Stockholm’s most well known shopping centres.

Just before the end of June 2019 Ametist was informed that Lottans housing unit would close and that there would not be a place for her at the proposed new site. After lots of to-ing and fro-ing Lottan got a place in an old people’s home despite everything Ametist did to try and keep her together with her long term housemates.

”One of her friends said `she’s not so big, she can live with me`”, explains Ametist.

Lottan’s friends and staff from her previous home have visited her a couple of times a month since she moved. The hope is that she will get a place where her friends are, or at least another place at a supported housing unit. Old people’s homes don’t have the same resources and the activities are not tailored to people with multiple disabilities.

”It’s a nice place and the staff do what they can, but she just sits in a chair. If she is anything like us – her sister or her mother – she will want to do things, live life”, says Ametist.

As soon as the pandemic is over Lottan will have get a companion who can take her out a couple of hours a week.

”She loves to look at artwork, jewellery and other beautiful things. I used to have painted nails, rings and other jewellery and she was very interested in and animated by them”, explains Ametist, who often takes her sister with her to garden fairs.

There, they have a cup of coffee and a snack and Lottan, who usually eats via PEG, eats a cream cake.

”She loves that”, says Ametist.

Because of the Corona pandemic Ametist could not meet her sister last Christmas.

”It was the first year that we could not go and look at the window display together. But I bought Lottan an iPad for Christmas so that we could Facetime each other instead.”