On November 15 we held our annual General Assembly meeting of Rett Syndrome Europe in the beautiful city of Vienna.

Our Austrian friends from ÖRSG hosted the meeting and kindly arranged the organisation of the day. We had the pleasure to have most of the European associations representing Rett syndrome present, plus the Russian Association, Armenian representative and IRSF from USA. 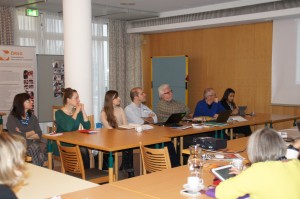 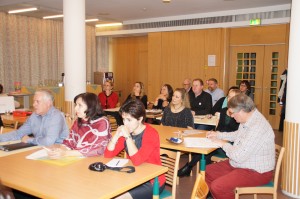 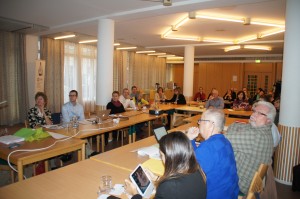 After a warm welcome and a roundtable introduction, the RSE activity report was presented by the President Thomas Bertrand, followed by the financial report by the Treasurer Wilfried Asthalter. The annual elections to the board, (according to RSE statutes) then took place. The one post due for renewal was that of Danijela Szili, who was willing to stand for a further term of office. With no other nominations for the board position Danijela Szili was unanimously re-elected. 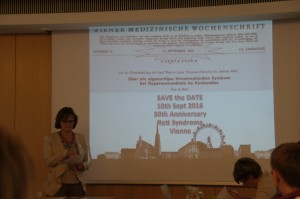 The main focus of the rest of the day was dedicated to having an overview of Rett (or multidisciplinary) clinics/centres that have been organised in each country and how they were set-up.

–        Stella Peckary (Austria) described Neuro paediatric family camps from 2001 to 2005 followed by the actual paediatric neurology care in the Medical University of Vienna.

–        Lorna Jaffa (UK) explained the work of the multidisciplinary consultations for children and adults taking place in 5 clinics around the UK. She also described the work of Rett UK in holding family and regional days around the country and presented the new Rett UK Family Companion which has just been launched.

–        Dr Anne Marie Bisgaard (Denmark) gave an insight into the Rett Centre in her country and explained that it has permanent state funding to employ a full time paediatric neurologist and physiotherapist. Anne Marie emphasised that the project all started because families pushed hard to get the Kennedy Centre financed by the government.

–        Oliviero dell Oro (Italy) gave a description of the 5 centres existing across the whole of Italy, mentioning that they are partly financed and supported by by AirRett, the Italian RSA. Each Centre has their own specialty but they all share a common knowledge of the disease.  An exciting pilot project, called “Passport Clinic” has just been launched in Italy. It is a bracelet, designed to be worn by the Rett person, carrying an electronic chip that would include important medical information relating to that person.

–        Pedro Rocha (Catalonia) focused his talk on the referral centre of Sant Joan de Déu hospital in Barcelona that sees hundreds of children every year. Pedro went on to explain that when a Rett syndrome person becomes an adult of 18 years of age, it is difficult to find care for them. 6 regions were identified by the Catalonian Rett Association and the national health ministry to provide care for Rett women in special day care centres. Families still need to pay a proportion of the fees.

–         Wilfried Asthalter (Germany) presented the specialised consultation system for Rett syndrome people (both for children as well as for adults) in Kassel that works in close relationship with the University of Göttingen (for orthopaedic paediatrics exclusively).  Consultations expenses are covered by the German health insurance system.

–        Elisabeth Celestin (France) presented a project of a referral centre with a multidisciplinary consultation. Elisabeth and Thomas also mentioned the clinical trials related to Rett syndrome that are on going in France.

–        Zuzanna Slotwinska (Sweden) gave an interesting and interactive talk about the challenges of finding support for Rett people in Sweden because the provision is variable, depending on where one lives. The health systems support is linked to local councils. Currently there is a Rett Centre at Froson, but there can be problems getting a referral there. An additional problem is that Dr Ingegerd Witt Engerstrom, who heads up the Centre is due to retire imminently and a replacement is being sought.

–        Dr Christian Bergsaker (Norway) presented the history of the creation of the Rare Disease Centre in Frambu. This has been realised by a close relationship with the Norwegian Rett association. Family days and Summer Camps are also organised here, with the government covering the families’ expenses.

The meeting then had the opportunity to hear Dr Alan Percy, connected from the USA via Skype. Dr Percy presented the Natural History Study of Rett syndrome. The documentation of the disease has received new financial support from NIH until 2019. The 11 American Rett centres are participating. The study includes not only classical RTT but also Mecp2 duplications, CDKL5 and FOXG1 mutations. A metabolomics approach was also mentioned as there are hypothesis that there could be a signature in the particular metabolism of Rett individuals. An in-depth review of all the northern American centres and their specialities was then presented by Paige Nues, Director of family empowerment of IRSF (International Rett Syndrome Foundation.)

In the breaks between the sessions, Romana Malzer (Austria), who is herself a Rett parent, kindly presented the work she is involved in at “LifeTool.” She used a film, showing her daughter Isabella happily using the eye-tracking system (Tobii), using different software and other toys or electric devices that could be controlled with her eyes. Representatives could also test and have a look at the systems, using the various gadgets which Romana had brought along. 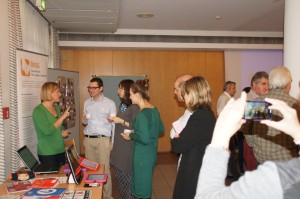 All presentations (zip file) are available to download here.

Romana’s presentation is also available by clicking on this link.

For the complete photos gallery, please click on the picture below: